I am not a cat person. There, I said it. I have not mentioned that fact on this blog to date as I was afraid of the backlash from all of you cat lovers. But for several years now I have avoided cats at all costs. I have enjoyed cats in the past, but after a few bad experiences I swore I would never again allow one in my house unless our family was eating it (okay – I did say that but I didn’t really mean it – mostly).

You may wonder how I have been able to successfully photograph so many cats and well — I am not sure. Especially since I am also quite allergic to them. But I am not mean to cats. I just haven’t wanted to befriend any.
And then … there was “Winston“. Sweet, sweet, adorable, manly, soulful Winston. And I fell in love. For real. He came in for a photo shoot and I was completely smitten. I rubbed him without faking interest … I cuddled him without secretly wanting him to get away from me … I played with him without having to act as though I was enjoying it. And I was floored by my feelings for him. They were so quick and so genuine. And he was available for “adoption” from the Bangor Humane Society — sort of. The woman (Erica) who brought him in really wanted to “adopt” him but was having trouble convincing her roommate. I — and the kids — were quite surprised to hear me tell her that if she was unable to convince him that I would like to know so that I could apply for him.

Mr. Winston
That night I dreamed of him. The next day I longed for him. The following day he was all I could talk about. The day after that I found out that Erica’s roommate said yes and that he was no longer available for adoption. I was heartbroken. But I did not want a cat — I wanted that cat — so I told my friends at the Humane Society not to go searching for any ole kitty for me — as I knew they would likely do just that — because they are wonderful and saw how eager I was to take “Winston” home.
They didn’t really listen to me. So, I told them the kind of cat I would want IF I were to want a cat. The cat would have to be a bit feisty, the complete opposite of needy, long-haired (as I am most allergic to short-hairs), interested in people without being pushy or in our faces all the time but at the same time he/she would have to be friendly and would have to want to sleep with me (as I grew up with a cat that was totally independent except at night — and I loved that relationship). And it had to be a kitten. How is that for a tall order? How on earth could my friends possibly know that much about a kitten? They couldn’t. But they tried.
Ms. Erica even sent me this pic of an available kitty at the Bangor Humane Society: 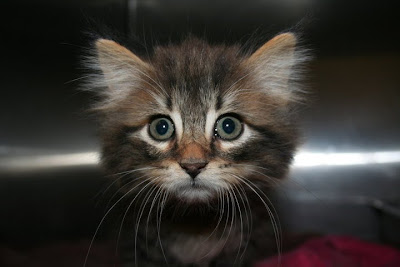 How could I not go see this little guy? Talk about a pathetic picture! And an adorable face! The next day Isaac and I were at the Humane Society checking out all the kitties. And sadly, there are MANY. We were even allowed out back where there are kitties who are not yet available for adoption as they require testing, surgery, or some additional attention, etc. The kitty that is pictured above was sweet to be sure … and so were so many other kitties … but none of them spoke to me … none of them tugged at me … which is exactly what I expected … as I was not searching for a cat … I simply wanted “Winston”.

But then … my friend Dawn (BHS worker) and I looked up to see this little lady: 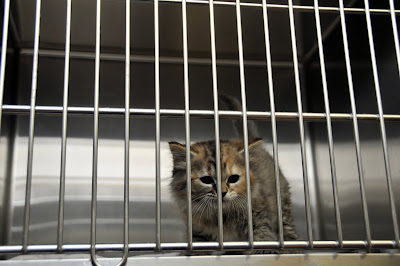 … and I felt something. I am not entirely sure what it was. But it was good. So, Dawn took Isaac and I – and the kitty – into a visiting room. And we played with this little one for a bit. Isaac fell instantly in love. But as much as I felt something for her, I couldn’t just give into it so quickly and easily. I told Dawn we would be back within a couple days to visit with her again – with Halis and Meg as well.

Two days later we were all in the same visiting room again. And we were all falling in love. She was feisty, alert, independent, healthy, sweet, etc. I had no idea if she would become all the things I wanted from a cat – but I was willing to try. So, she came home with us the following day. And we named her Lyra – after the Incredible Hulk’s only daughter (of course).

The afternoon of her arrival, Isaac and I played on the floor with her for quite a while. She was/is hilarious. And that night, I slept with her on the couch. She is only 1lb and I was afraid she would get lost or stuck in some part of our house — so I snuggled with her on the couch — just the two of us. And I sobbed. I literally sobbed from the pit of my soul. I loved her. I needed her. I didn’t know how much I needed a cat. How much my anger and “hatred” of cats had nothing to do with cats — but had to do with the pain of losing my childhood feline companion — and of how much I missed her — and how much this sweet little kitty reminded me of her — and of how quickly and deeply I was falling in love with her — and how she was/is the exact description of the cat I told my friends that I might consider. She is my cat. I found her. And she is perfect. 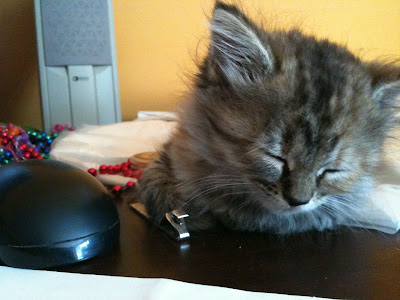 She hangs out with me as much as possible. Yet she never begs anything of me. She sleeps with me each night. And she sits with Isaac as though they have known one another forever: 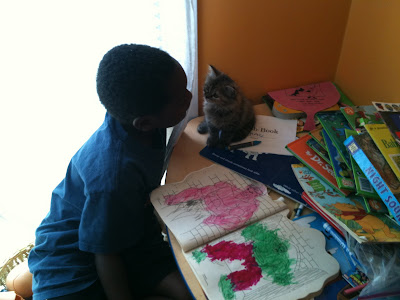 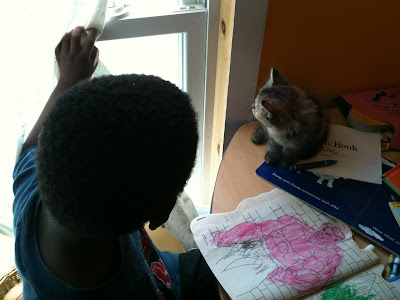 She even eats right along side him whenever he eats on the couch. Because she will eat right out of his own plate — I have to make her her own: 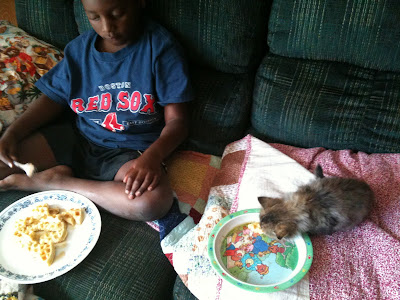 She especially loves waffles and rice pilaf.
She is awesome. And I miss her when I am away from home. And I am forever thankful to “Winston” (no longer his name) for showing me that I needed a cat in my life. And just as thankful to the two-legged creatures who helped me to bring Lyra home to us (Dawn, Erica, & Aunt Dandi).
Life is just a bit more complete now. And now I can photograph cats without pretending to like them. The facade has faded … and I am now a cat lover (though still more of a dog person). Thank Lyra.
Love,
Jodi
Tweet