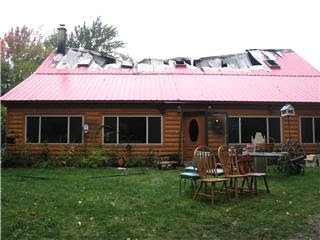 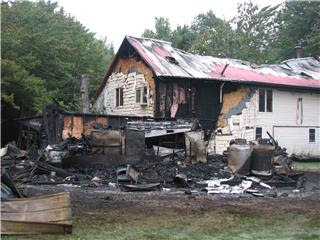 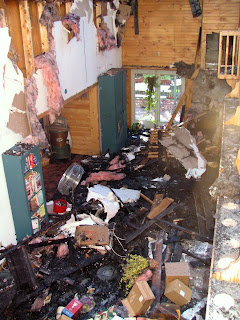 My parents just suffered a terrible house fire. And truth be told, I have no energy (or want) to explain the drama of it all … but it was quite a horrifying event. Instead, I would love to explain all the blessings that we experienced both during and after this event.
* My parents live deep in the woods. The fire was first discovered by strangers working across the street at American Concrete. These men called 9-11, then ran across the street, broke into the home, and rescued every one of my Mom’s exotic birds … even as the roof was caving in! Imagine that, strangers coming to the rescue of our birds … at the risk of their own lives. AMAZING!
* Jennifer, the neighbor who lives three doors down at Country Kennel ran over to the fire, knowing my Mom has dogs and cats and quickly went to work helping the fire fighters to find & identify all the critters. Then she offered her kennel up to house all our animals. (The birds and cats are currently being spoiled there). Jennifer and her husband stayed throughout the day to offer any and all assistance. They brought over every pet supply that could possibly be needed. Just incredible people!

* My parents were at my house when I got the call that their house was on fire. It was Jennifer who called and she became the liaison to all of us as we rushed to the fire. She and her workers were so generous with their time and efforts. We are humbled by their generosity.

* Due to several phone calls from myself & my parents, the fire fighters were finally able to rescue my Mom’s precious dogs who were caged under the stairs where no one was able to see them initially. They were all saved 🙂 The fire fighters were such heroes about making sure to get every pet out of there.

* While the fire fighters were there, two cats were found. One was rescued from underneath a bed that is now burnt to a crisp. Another was found outside. But a third was still missing and presumed dead (as the upstairs was completely destroyed and that is where he usually hid). Then, late that night, as Halis was searching through rubble upstairs … he heard a cat growl. He found the third cat hidden within some rubble …. unscathed!

* My best friend Melissa was the first “family member” on the scene. I called her as soon as we got the call because I knew it would take us nearly an hour to get to my parents home and I wanted her to instruct the fire dept on how to find all pets. She was AMAZING! I honestly don’t know how I could ever live without that woman. I ask her to do some of the most gut-wrenching tasks … and she does them without a second thought because she is so in love with me too. She kept the press away, helped to find animals, told the fire fighters about some important mementos that we would want pulled from the fire (she rescued a very important photo of my Pepere), kept me from fainting after I arrived, and made sure my son was whisked away and played with so that he didn’t experience any of the drama. And during the aftermath, she kept spirits high … and well …. I just can’t tell you how important is was to all of us that she was there. I believe that she was the glue that kept us all from losing “it”. I am so thankful for her …. and I am sorry for the rest of the world that she is all MINE 🙂

* My extended family, that I like to most affectionately call “The Rez” (because they are all native and all come from the same Indian Reservation), all came together to help my parents both during and after the fire. They are my self-created family … and they were also amazing! They never ceased in their efforts to make my parents life easier … and they still haven’t stopped. Days later, Johnny (also known as Isaac’s Grampy) has been doing all he can to do his best by my parents. And Deanna (also known as Isaac’s Nanu) has continued to offer everything she possibly can (including lots of good advice) in order to help. I am just so incredibly thankful for them as well.

* My biological family from NH – Aunt Lisa, Uncle Jim, Uncle Bill, My brother Jamie, all made the 4-hour trip to my parents’ home in order to help them both physically and emotionally in every way they could. They too were absolutely amazing. The love that was shared was just brilliant. They too were burdened with grief for my parents, but they made every effort to find the energy to assist my parents in every need. It was beautiful to watch that kind of love within a family — that kind of instantly coming together to support a family member in need. It is priceless.

* Also, family and friends who heard the news but could not be physically present sent prayers, offerings of help and love and support. The prayers were most appreciated! And the love was certainly felt.

* I am also SO grateful for all the precious items that were rescued from the fire … many handmade quilts, very special photos, heirloom items, etc. My mom and I both felt as though someone (Pepere and Mimi) were guiding the hands of those men and woman to collect that which was most dear to us. There was only one very sad loss for me and I will blog about that later (but even that will be just fine after all).

* Many community members came by to offer their help. Some brought donuts and dog biscuits, others brought their expertise and assistance in important details (thank you Ryan!). Some business members brought offerings of the use of any of their equipment (thank you Family Tree Landscaping!) I think my parents were shocked to see that the human race is capable of such generosity (they had little faith in that before). Add that to the growing list of blessings – my parents may have some renewed faith in the beauty of humanity!

* A local policeman gave Isaac a stuffed dog to enjoy – to take some of the trauma of the day away. How sweet is that – police now keep goodies in the trunks of their cars for kids in order to reduce their trauma.

* The fire men & women were so inspirational. Not only did they make every effort to save my parents’ home … and risked lives to save the animals … but they also went out of their way to grab any sentimental items they could find. I wanted to kiss the feet of every one of them. I felt so humbled by them. I hope Isaac is a firefighter someday 🙂

* Also, though I cannot elaborate about it here … but there was an incredible healing that took place in my Mom’s heart that day of the fire … she gained some insights into some personal matters that I really believe she could have only gained through this fire …. which I think has cleansed her soul in more ways than she even realizes. Fire can do that. That is what I am most thankful for … and if I am right … and she has begun some incredible healing journeys that were initiated by this event … than I am ever so thankful for that seemingly devastating fire.

* Oh yeah, how could I forget … I am also so grateful for my loving husband, who has dropped everything in his life to take good care of my parents. The man who said that he would never live with my Dad, (EVER!) has sincerely offered (time and time again) for them to move into our house while theirs is being built. He loves them so much and is determined to make this easier on them by doing whatever he can. God Bless a Good Husband 🙂

Well, there is likely so much more to say about the blessings that were experienced that day. And though it was horribly sad to watch my parents house go up in flames … we are all truly blown away by how much our lives have been touched in positive ways by this as well.